One last post on work environment for a while. This one describes my
own experiences and invites you to think about yours. Especially if
you are an executive making work environmnet policy. Try to remember
what mattered when you did not have the corner office.

My first two “work environments” were two-man cubicles, seated back to
back with a small common area in between. By cubicles I mean the 6
foot gunny sack walls with integrated desks and overhead cabinets. We
used to refer to them as the Herman Miller office. Still could. If you
were lucky, and I was, you had an office mate you could get along with
and for the most part share the space with only an occasional incident
of annoyance.

Fairly early in my career I worked for an employer that built a new
and modern research headquarters. We called it the flash cube. Look up
instamatic camera for the reference. They decided that if two-man
cubicles was good then a four-man “bull pen” environment would be even
better. They were wrong. What they discovered is people problems grow
exponentially and with engineers it is a very large exponent.

Many more years of my career was spent in the now traditional 6 by 8
cubicle farm trying to get the coveted and larger manager’s cubicle by
the window or even better be promoted to a “closed door” office. I
remember a time when I was paying a lawyer to compose a will, an
insurance agent for my auto, home and life, a stock broker for my
measly 401k investments and an accountant to do my taxes. I had
visited them all in a short period of time and after visiting the last
and returning to my cubicle I realized that although I was just as
professional as all of them, I was the only one working in space with
less space and privacy than my laundry room.

Once, when an employer decided to eliminate a storage slash library
closet, a 7 x 10 interior room with a door I convinced the president
of the company to let me have it as an office. Although I had been
promoted to lead engineer for a large project I was not a manager or a
“principal” and therefore not authorized to have a manager’s
cubicle. At first everyone laughed at the idea that I wanted to work
in a storage closet. But after occupying the office a short while I
was actually forced to move to the least of the windowed cubicles
because my colleagues considered it more of a breach of order to have
a door than a window. The closet was left vacant. And I was eventually
promoted to Principal, I hope to reward me for my accomplishments and
not just to justify the office space I had acquired.

My employment positions after that were in management and I had
doored, windowed offices large enough for my desk and a conference
table. And in the one case where I was sufficiently empowered to
define not only my work space but those that were in my charge, I
worked hard and succeeded in give everyone an office with a door and a
window even if some of them were a bit small, even smaller than the
traditional cubicle.

Since becoming an independant my work environment has been a large
dedicated room in my house, with doors, windows and enough room for 4
monitors, 16 feet of desk, two 5 drawer file cabinets, a guest chair,
a conference table and a corner with two guitar amplifiers and a rack
of guitars.

So which of the work environments were the most effective? which was
the most efficient? which is the environment being adopted by the best
employers? Which environment would you prefer?

I have seen two recent articles regarding work spaces that has me
blogging about the topic. The second will be discussed in the next
post but the first is a promotion of a “new” work environment trend
that seems to promote a direction I find so completely in opposition
from my own experiences that I found it farcical.

almost 30 years ago I was employed by a company that saved office
floor space by going from two-man shared cubicles to four-man spaces
they called “bullpens”. Google “bullpen office” images and here are
two examples of what you will get: 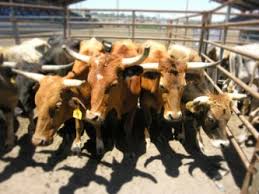 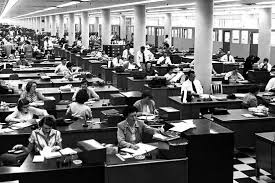 The article states, “COOs will not continue to pay high electric bills
and real estate costs for people who use their space 30% of the time.”
Referring to the time employees spend in traditional offices. This
presumes that the other 70% is spent in the cafeteria, bathroom,
conference rooms and “collaborating” with colleagues. So their answer
is get rid of the office and only pay for the non-office space. Did
anyone stop to think about which time partition was actually the most
productive?

Does that look like forward thinking? The employer that had me in a
bullpen also had manufacturing co-located in an adjacent building so
one of the items you could requisition from the supply room was those
large bulky ear muffs that provide -30db of hearing protection.

I walked into a neighboring bullpen one day to ask a colleague a
question. He and his 3 office mates were facing the four corners all
wearing these ear muffs. I could have been a 40 piece marching band and
they would not have know I had entered. I walked up and tapped the
shoulder of the one with the information I needed and he almost went
into cardiac arrest.

Yes, it was that long ago that even the Sony Walkman was not yet
ubiquitous. So look at the second picture of the second article
referenced above. And see that the -30db ear muffs have been replaced
with +30db of constant distraction, lest someone wants to
collaborate.

Does that look like someone who wants to collaborate? When did
covering ones ears become more open to collaboration than an office
with a closed door? How do I politely knock on headphones?

But the same article has another solution besides the headphones. Here
it is

a $5.00 pyramid that let’s you indicate whether you are available for
connectivity or productivity. “Flockd is an analog, face-to-face,
social media accessory” Again, is this an SNL skit? Make me a pyramid
that’s 200 square feet with a door and a window please.

You may have heard of a successful online education site at https://www.khanacademy.org . This site has been recommended time and again as being a wealth of educational resources delivered far superior to what is offered in many classrooms. Free, quick and entertaining videos that teach in 10 minute digestible chunks.

I follow a blog, http://webtalkwithbob.blogspot.com , that has lately been focused on changes happening and needed in the education system. This blog has been promoting a venture at, https://www.coursera.org . Coursera describes their effort of providing education over the internet. They describe the “Pedagogical Foundations” for providing a basis for why online education is at least as good and with some evidence it can be superior to physical attendance in a classroom. The Coursera effort is more than education for education sake, it seeks to be accredited and provides educators and curricula from top Universities. So far, it also is free.

Educators will tell you that education has many benefits and is not just vocational training. However, education is a significant financial investment and it could not be so if it did not have a financial return. So, most students that purchase education expect it to benefit them financially. They are pursuing education to start or better their careers. So what happens when a Coursera or Khan Academy accredited graduate, which will likely exist someday, enters the workplace?

When I discovered the word Pedagogy, the study of education, at the Coursera site  I looked for its complimentary word meaning the study of work and I found that the word is Ergonomics. Ergonomics does not just mean a comfortable chair and oddly shaped keyboard. It has the same meaning and potential application to the workplace as Pedagogy does to education. So as Pedagogy shows that internet based learning with a Telepresence has advantages to education, Ergonomics should show some of the same benefits to telecommuting.

In fact when the telelearner becomes more the norm, the workplace will have to adapt and provide for the telecommuter. Something it does not do well yet. Companies that start developing and adopting policies and resources that support telecommuting will soon have the advantage of the best educated employees.